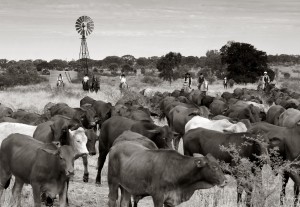 Harry Redford is immortalised as “Captain Starlight” in the Australian classic ‘Robbery Under Arms.’ In this classic he was known as king of the cattle duffers. Harry was born in 1842 as Henry Arthur Redford, the son of an Irish convict father and a “Currency Lass” in Mudgee, New South Wales. The youngest of eleven children, he grew to be a massive man, nearly two metres tall, described as bushman born and bred.

In 1869 Harry went to Queensland and set up a carrier business with four mates, transporting produce from Tambo to Bowen Downs, one of the greatest cattle runs in Queensland. This expansive run stretched for over 200 kilometres across the endless plains of Central Queensland, north of Longreach boasting some of the finest Mitchell grass in Australia.

At the time of Harry’s arrival, Bowen Downs carried over 60,000 head of good quality cattle. With so many cattle spread over such a huge property, Harry saw an opportunity. He came to the belief that the property was so large that missing stock would go unnoticed for some time – perhaps enough time for him to be long gone.

His plan was so audacious that many still consider it impossible, telling his mates that they would muster 1,000 head of cattle overland to South Australia where the Bowen Downs brand would mean nothing. They considered themselves unlikely to raise suspicion travelling over the property, given their role as teamsters. Should they be caught with some stolen bullocks in tow, they could always bluff their way through claiming they were searching for their own stray bullocks.

Harry and his team mustered 1,000 head of cattle on a 3000km overland journey from Bowen Downs to Marree in South Australia, conquering the desert that had claimed the lives of Burke and Wills. Their mistake was in stealing a huge white bull worth more than 500 pounds. They needed the bull to keep the herd quiet, but it was a decision that would prove Harry’s undoing.

On 11 February 1873, Redford and the white bull were star attractions at his trial in Roma. Surprisingly, he was found ‘not guilty’ leading Judge Blakeney to made his famous statement to the jury, ‘I thank God that the verdict is yours, gentlemen and not mine.

It is a common belief that, Redford was acquitted by the jury out of admiration for his outstanding droving skills. For a decade after, Queensland cattle were overlanded along the track the Redford pioneered.